Employer Stock Grants (the Good, the Bad, and the Ugly)

Employer Stock Grants (the Good, the Bad, and the Ugly)

Corporations typically try to align the interests of the employees with those of the shareholders.  The employees of a business have a major impact on a company’s performance, but if the employee is “just” working for a paycheck they may not give their best effort.  It is commonly recognized a business owner will often put in many extra hours to make the business successful.  So how can a corporation make employees behave more like owners?

A common practice is to issue employer stock to employees, primarily using Restricted Stock Units (RSUs for short). Corporations typically grant RSUs to middle-level management and up, though some companies also give entry level employees small quantities of RSUs.  If you receive RSUs from your employer it is often a significant part of your compensation package.  Importantly, RSUs are best handled in a structured fashion to receive the biggest benefit and avoid potential pitfalls.

Bob joins Super Healthcare Inc. in 2014 and receives a RSU grant of 150 shares in July. His RSUs are structured to vest (meaning released to him) over the next three years, with 50 shares released in July of each year. If Bob leaves before his RSUs vest he forfeits them, providing him an incentive to continue working at SHCI.

As July 2017 approaches, Bob knows he’s about to receive 145 shares of SHCI stock and the share price is now at $140.  Bob is pumped about his upcoming RSU vesting, currently worth $20,300 (145 shares x $140/share), and is doing his best to help the company hit its targets. Bob believes if the company hits its targets, the shares may be worth even more than the current share price and likely won’t be worth much less.  Using the RSUs, the shareholders have aligned Bob’s interest with their own – both through the company’s share price and providing a strong incentive for Bob stay at the company to see future RSU grants vest.

While in our example, Bob’s RSUs are vested over three years, corporations can use whatever vesting schedule they desire.  RSUs commonly vest on two, three, and five year schedules. Corporations do not have to issue RSUs to the employees every year, but often they do in order to keep the employee incentivized and aligned with shareholders.

A fundamental tenant of the Internal Revenue Code is income is not taxed until it is constructively received.  Since an employee who receives an RSU grant cannot do anything with them until they vest, there is no tax due until the company stock is actually received at vesting.

Corporations commonly liquidate 25% of more of the vesting shares to withhold income and payroll taxes. RSUs are actually “units” and not restricted stock “grants,” though the terms are often used interchangeably.  This is an important distinction, because employees who receive restricted stock grants have the option to file an 83(b) election on the restricted stock.  The 83(b) election is not available for RSUs and is beyond the scope of this discussion.

While RSUs can and should be viewed by employees as a formalized bonus structure, it can have one big drawback (for the employee). Many employees who receive the RSUs don’t liquidate the shares because they live primarily on their salary. Over time, it is not uncommon for employees to accumulate tens- or hundreds-of-thousands of dollars in company stock.  This poses a big risk.

This particular risk is most commonly called concentrated stock risk, and it occurs when a person has a large holding of an individual stock.  For employees, it can be particularly risky, because they also have their salary and other benefits tied up in the same company as the concentrated stock.

Concentrated stock risk for employees was most dramatically illustrated by Enron’s collapse in the early 2000’s. In that unfortunate event, many employees held company stock in their 401(k) and saw their retirement accounts decimated as Enron veered towards bankruptcy. Not only did they lose much of their savings, they lost their job and benefits. Ouch! Though concentrated stock risk in their employer may seem minimal to many employees, it is real. Besides Enron, many other large companies have seen bankruptcy or major share price declines, including AIG, WorldCom, Lucent Technologies, Nortel, and more.

If employees accumulate a concentrated position in company stock through RSUs, they can run into a different problem – how to exit the concentrated stock without realizing significant capital gains and paying the associated taxes.

A clear-eyed employee should manage their taxes and avoid concentrated stock risk by taking a few steps.

Each time RSUs vest, the employee should sell the company stock right away. Since the RSUs are taxed when they vest, there is almost always a minimal tax impact if sold immediately.

Many employees balk at selling newly vested RSUs because they believe the company is doing well and the value will increase.  If you find yourself thinking this same thing, remember you likely have more RSUs vesting in future years.  That means even if the stock increases, your unvested RSUs are going to participate in the stock’s increase and the RSUs will eventually vest.  This is key, because if you follow this strategy for several years, eventually you will sell the shares right before they increase in value.  Don’t let dreams of potential riches keep you from taking prudent steps.

Take the proceeds from selling your RSUs and use them to build a diversified portfolio of investments.

For employees who have accumulated a large position in employer stock, seek the advice of a tax professional to develop an exit strategy.  Depending on the amount of gains in the company stock, your options could include immediate liquidation, partial strategic liquidation, charitable gifting, or holding the stock.

Restricted stock units are a valuable form of compensation for employees who receive them, but they come with specific risks that don’t accompany cash bonuses.  If you receive RSUs from your employer, you need to develop a strategy to make the most of this special form of compensation without running into tax pitfalls.

Benefits of Giving Stock to CharityTaxes 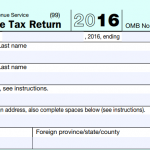